Pen is mightier than sword : A story by Gaurav Madaan 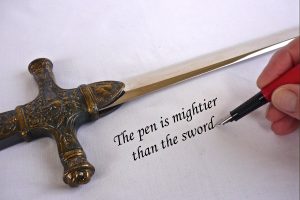 It is a stormy night. There is dark all around. It is raining outside and inside that room there is sitting a poet; quiet and depressed, on a chair. His partially opened eyes are continuously staring outside the window. Probably, he is thinking what should he write and how??? He has become dumb.

And there on the table I could hear the wind taking some of the papers away and opened that notebook in which there was written something. Don’t know what, but it was surely some incomplete story. “He won’t write anymore”, an anonymous voice comes. It was the PEN on that notebook. “But why”, the paperweight asks.

“Because he thinks he is failing, he thinks it is all waste, it is going to bring revolutions. I will not change the world”, the paper produces an aggressive sound like they could feel him. “It’s all because of me, I am the culprit who de-motivated him, who made him a coward”, an article from a newspaper speaks this time. The stormy wind comes closer to papers and they rise their sound louder and even more aggressive reading the lines from his notebook.

“You change the world, their minds with the power of your pen; it is more than a Bomb” – Bhagat Singh told him in imagination.

And from that storm comes a soul, in a complete black suit. It comes near to the paper and that pen. And it repeats a single line again and again sometimes slowly and sometimes louder.

“Don’t give up, don’t give up”. He gets up, takes his pen and starts writing. And the soul disappears smilingly leaving the impression on his mind. 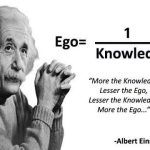 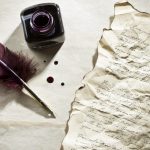