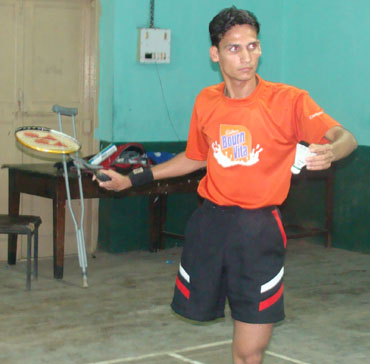 Girish Sharma is a living story teller who tells us that no matter what circumstances are, you can still be a Champion in your preferred field in your life. When he was two years old he lost his one leg in a train accident.

For most of us, this would be a huge set-back as the feeling of being disabled and handicapped severely attacks our mind and tells us that we can not do those things which normal people can.

But Girish had something else in his mind. He never let his disability to become a hurdle in achieving his dreams. Girish Sharma says “When I was a child, I used to play Cricket, Football, Badminton with normal children of my age. My disability was nowhere near in my mind.

I enjoyed those games as much as a normal person does.” What a spirit!

He even rides a bicycle in heavily traffic areas of city Rajkot without any problem. When I went to meet him, he was on the way and I was waiting for him. When I saw him coming, he was riding bicycle so fast! I was stunned by his self-confidence. He has won Gold Medal in Paraolympic Asia Cup for Disabled which was held in India. He has also represented India and played in other countries such as  Israel and Thailand. And he is going to participate in a world championship which is to be held in Germany in May, 2009. But shocking truth is that, he receives no monetary help from State Government or Indian Government. It costs around Rs. 80,000/- (approx US$1600) to participate in such an event which covers entry fee, to and fro flight charges. Girish Sharma’s financial position is not so good and still he has to bear all these expenses. This is rather a shameful truth to know that even though he leads India for the disabled, plays for country and brings Gold medals backhome, he is left unrecognized.

Like when India won first Twenty20 World Championship in South Africa, every state government declared some great monetary gifts to players belonging to their state.

Like Irfan Pathan and Yusuf Pathan were given some amount in crores. I am not asking for crores of rupees but at least am given few lakhs, it would really help me for attending various championships being held in India and worldwide”, says Girish Sharma.

He does six hour training every day. He has got one strong leg that he just doesn’t play standing but he moves around the court all the time to hit the shuttlecock. It’s truly amazing to watch him playing Badminton on court. He doesn’t let you feel that, he is disabled. He plays like a normal person. Even I played few shots with him when I went to meet him, and I felt like I had a normal opponent. Check out video to really feel what I’m talking about.

Girish says “When I meet companies and ask for their sponsorship for my trip, first thing that ask me is that who watch your sports?. Now, this is truly insulting one. Paraolympic is arranged after Olympics. Not only badminton but Swimming, Table Tennis and many other sports are played in Paraolympic. But in India only cricket is accepted as sports, where as other sports are ignored.”

Disabled Champions like Girish Sharma do not ask for crores of rupees from Government. Few lakhs would do. And they must get it from State or National Government. After all, he represents INDIA and brings Gold medals for her. 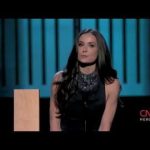