Born in an AwadhiIndianHindu family of the Srivastava clan of the Kayastha caste, in the village of Babupatti, in the district of Pratapgarh, in the United Provinces of Agra and Oudh in British India, he was also a poet of the Hindi Kavi Sammelan.

He is best known for his early work Madhushala (???????).[3] He is also the husband of social activist, Teji Bachchan, father of Amitabh Bachchan and grandfather of Abhishek Bachchan. In 1976, he received the Padma Bhushan for his service to Hindi literature.[4]

From 1941 to 1957, he taught in the English Department at the Allahabad University and after that, he spent the next two years at St Catharine’s College, Cambridge, Cambridge University completing a PhD on W.B. Yeats.[3]

He began using the pen name “Bachchan” (meaning child) instead of Srivastava when he wrote Hindi poetry. After returning to India, taught English literature at Allahabad University. He also worked at All India Radio, Allahabad.[3]

Bachchan was fluent in several Hindi languages (Hindustani, Awadhi).[5] He incorporated a broadly Hindustani vocabulary,[6] written in Devanagari script.[5] While he could not read Persian script,[5] he was influenced by Persian and Urdu poetry, particularly Omar Khayyam.[7]

Read more about the author of the poem at https://en.wikipedia.org/wiki/Harivansh_Rai_Bachchan 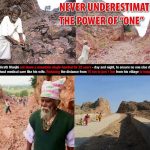