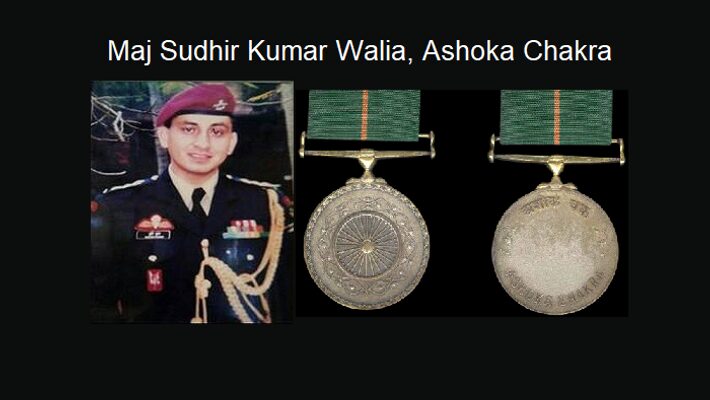 Major Sudhir Kumar Walia, Ashok Chakra recipient once said – “I won’t die in an accident or die of any disease. I will go down in glory”

Officers like Major Sudhir Walia, AC SM and Bar, are the icon and shining example of valour, dedication, commitment and super excellence. He has made us proud through his citation & details of outstanding achievements during his short stint of an army career.

The nation will always remain indebted to Major Sudhir Kumar Walia for his supreme sacrifice and by his gallant act. He has occupied space in the hearts of millions of Indians. Many from the young generation will emulate him and get inspired to follow his footsteps and make the country proud. An officer like him is born once in a generation.

For his bravery and exceptional service to the nation during his service career, Major Sudhir Kumar Walia was awarded Sena Medal two times, a rare honour for a soldier.

Major Sudhir Kumar Walia hailed from Kangra district of Himachal Pradesh. Born in a military family of an Army veteran Subedar Major Rulia Ram Walia and Smt Rajeswari Dev, Major Sudhir always wanted to follow into the footsteps of his father and join the Army.

He doggedly pursued his dream right from his childhood days and his school, “Sainik School Sujanpur Tira(HP)” located near Hamirpur helped him in his efforts. Consequently, he cleared NDA in his first attempt and joined the prestigious academy.

Major Sudhir Walia graduated from Indian Military Academy (IMA) in 1988. He was commissioned into 4 Jat of the famed Jat Regiment. Soon after commissioning, he became part of 70,000 soldiers who were sent to Sri Lanka on a peace mission under Indo-Sri Lanka accord.

After returning from Sri Lanka, he moved to the 9 Parachute Commando regiment. It is a special force of the Indian Army that specializes in mountain operations. Major Sudhir Walia and his unit, 9 Para(Special Forces), known mainly for their daredevil covert operations undertook numerous operations in J&K.

In 1997, Major Sudhir went to the United States for a specialized course. He also got the rare honour of speaking at the Pentagon during this mission. Known as ‘Rambo” in the Indian Army he was called ‘Colonel’ by his peers in the course, who had come from 80 other countries. He was later deputed as aide-de-camp to the Chief Of Army Staff and was twice decorated with gallantry awards for combating militancy in J&K.

While he was excelling in his career “The Kargil War” commenced and Major Sudhir Walia wrote an application to General Malik, the Chief of Army Staff at that time, requesting him for a posting to Kargil to be with his unit in the time of need. General Malik acceded to his request and sent his most fearless and valiant soldier to the battle area of Kargil. In fact, at that time Major Sudhir was recovering from injuries, and his team recaptured the Zulu Ridge.

After the end of Kargil war on 26 July 1999, the Army was continuing its high alert status to deal with any eventuality. Major Sudhir Walia and his team of daredevil commandos disguised as militants were carrying out the task of searching the hiding militants who could pose a serious threat to the security forces. On 29th Aug 1999, Major Sudhir Kumar Walia with a squad of five commandos was on a “Search and Destroy” mission in the dense jungle of “Hafruda Forest” in Kupwara district of J&K. The squad suddenly chanced upon a well-camouflaged hideout having twenty-odd terrorists.

Kupwara Operations proved to be a fatal loss for Indian army. As during the process, he sustained gunshot wounds in his stomach. He was unable to move. Major continued to give orders to his team until they eliminated all the suspected militants. He fought till his last breath and evacuated 35 minutes after the operation ended. Major Sudhir brought to the army base hospital but he succumbed to the injuries en route.

Salute to our National Hero !!

For more such stories on National Heroes, visit: