Quote by Irfan Khan:-
Appreciate love and cherish the moments.
Maybe somewhere in the pursuit of winning, we forgot how much it means to be loved. In our vulnerability, we are reminded. As I leave my footprints onto these steps of my life, I want to pause to be grateful for receiving your immense love and support, it soothed me in my process of healing. So I travel back to you, thanking you from the bottom of my heart.

About Irfan Khan
Sahabzade Irfan Ali Khan (7 January 1967 – 29 April 2020), known professionally as Irrfan Khan or simply Irrfan, was an Indian actor who worked in Hindi cinema as well as British and American films. Cited in the media as one of the finest actors in Indian cinema, Khan’s career spanned over 30 years and earned him numerous accolades, including a National Film Award, an Asian Film Award, and four Filmfare Awards. In 2011, he was awarded the Padma Shri, India’s fourth highest civilian honour . Khan made his film debut with a small role in Salaam Bombay! (1988), which was followed by years of struggle. After starring in the British film The Warrior (2001), he had his breakthrough with starring roles in the dramas Haasil (2003) and Maqbool (2004). He went on to gain critical acclaim for his roles in The Namesake (2006), Life in a… Metro (2007), and Paan Singh Tomar (2011).

He died at the age of 53 on 29 April 2020 due to a colon infection. Khan was described by Peter Bradshaw of The Guardian as “a distinguished and charismatic star in Hindi and English-language movies whose hardworking career was an enormously valuable bridge between South Asia and Hollywood cinema”. 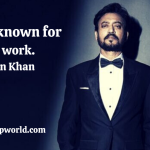 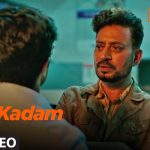