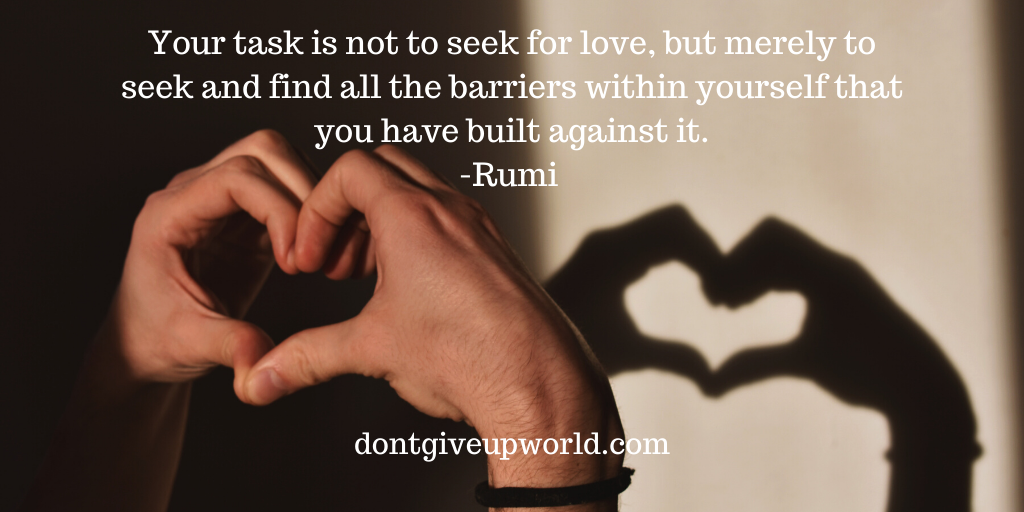 Barriers to Finding Love: Quote by Rumi tells us that barriers exists within us, so we must resolve our internal barriers.

Your task is not to seek for love, but merely to seek and find all the barriers within yourself that you have built against it.

About the Poet Rumi

Rumi’s influence transcends national borders and ethnic divisions. Iranians, Tajiks, Turks, Greeks, Pashtuns, other Central Asian Muslims, have greatly appreciated his spiritual legacy for the past seven centuries. His poems have been widely translated into many of the world’s languages and transposed into various formats. Rumi has been described as the “most popular poet” and the “best selling poet” in the United States.

Rumi’s works are written mostly in Persian, but occasionally he also used Turkish, Arabic, and Greek in his verse. His Masnavi (Mathnawi), composed in Konya, is considered one of the greatest poems of the Persian language. His works are widely read today in their original language across Greater Iran and the Persian-speaking world. Translations of his works are very popular, most notably in Turkey, Azerbaijan, the United States, and South Asia. His poetry has influenced not only Persian literature, but also the literary traditions of the Ottoman, Turkish, Chagatai, Urdu and Pashto languages.