In 2013, at the age of 64, Nyad became the first person to swim, without the aid of a shark cage, from havana to Key West, Florida. It was her fifth attempt in 35 years. Nyad’s 111-mile feat places her firmly in the pantheon of ultra-endurance athletes. This is when she got the attention from the world.

Between her first attempt, at age 28, and the last four—all after the age of 60—Nyad suffered near fatal box jellyfish stings, the crushing force of a Gulf Stream that blew her dozens of miles off course, hypothermia, third-degree burns from saltwater chafing, vomiting from ocean swells, and the threat of shark attack. Six weeks after her historic landing in Florida, Nyad swam 53 hours straight in an outdoor pool in Manhattan to raise more than $100,000 for victims of Hurricane Sandy.

Positivity bursts from her at rapid speed.“I’d rather dream large and fail than shoot for mediocre and never discover my limits,” Nyad says. Her definition of large is, of course, exponentially greater than most humans’.

In this TED talk she tells to find your horizon and everyday of your life is epic to do something. In case if you don’t feel like that she’ll help you find a way. 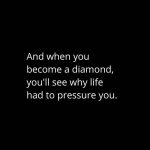