Abraham Lincoln was born on February 12, 1809 in a one-room log cabin, located on a farm near Hodgenville, Kentucky (a state that permitted slavery at the time).

When he was only nine years old, his mother, Nancy Hanks Lincoln, died. A year later, his father, Thomas Lincoln, remarried a woman named Sarah Bush, who had a tremendous influence on the young Abraham Lincoln.

To support his family, Abraham had to work at a neighboring farm. Working denied him the opportunity to go to school, so the total amount of formal education he received was less than one year.

Although his formal education ended very quickly, his self-education was just beginning. An avid reader, he read everything he could get his hands on, studying a variety of subjects, such as mathematics, literature and law. Eventually this self-educated man became a lawyer.

Lincoln had a very strong desire to make a difference, so he entered politics. In August, 1832, he finished eighth out of 13 in a race for the Illinois House of Representatives.

Abraham believed that the government should be a positive force, whose goal was to serve the people. He reasoned that in order for him to have significant influence and impact on the government, he must achieve a high position in government — preferably the position of the President of the United States. This goal eventually became his burning desire.

In 1834, while practicing law in a firm he had established with several partners, Lincoln ran for and won a seat in the Illinois Legislature. He served a four-year term, and he soon developed a reputation as a capable and honest politician.

Unfortunately, over the next decade he experienced numerous business and political setbacks. But unlike most people, Lincoln did not let any of these challenges — including a business and personal bankruptcy — discourage him from going after his dreams.

On November 4, 1842, he married Mary Todd Edwards, and they had four children over the next 12 years. In 1836, Lincoln won an election to Congress. It was during this time that he took an unpopular stand against President James K. Polk regarding the Mexican War. Abraham thought the war was unjust.

Because Lincoln’s viewpoints were so different from many other government officials, he became unpopular among them.

After his term ended in 1849, Lincoln took the next five years off from politics and focused on his law practice. Again, he encountered more business setbacks. But again, he persisted, and did not let “so-called” failures discourage him.

In 1854, he returned to the political arena. One of the first things he did was to oppose the Kansas-Nebraska Act, which threatened to extend slavery to other states.

In 1855, he ran for the Senate but was defeated. The next year he went after the Vice Presidency position, and was also defeated.

With so many failures, a lot of people, in Lincoln’s position, probably would have given up. But because he was determined and committed to make his political dreams come true, he would get up each time he was knocked down. He knew the only way to gain ground, to move forward, to march on, and to turn his goals into reality, was to learn from his setbacks and failures.

Finally, in 1860, Lincoln’s years of persistence and hard work paid off when he was elected the 16th President of the United States.

Sadly, at this time the states were no longer united. The South depended on slavery for its prosperity, so when the North opposed the extension of slavery into the new western states, the southern states broke away and formed their own union.

As the newly elected president, Lincoln decided that the original Union must be saved at all costs — even if it meant a civil war. In 1861, the Civil War began.

On November 19, 1863, on a battle field near Gettysburg, Pennsylvania, President Lincoln presented to the people his vision for a nation conceived in liberty, where everyone is created equal. This speech became known as the Gettysburg Address and it has shaped the destiny of the United States of America.

By the time the Civil War ended in 1865, after four long years, it had cost the lives of half a million Americans. But the Union was saved, the slaves were freed, and President Lincoln’s lifelong dream was realized.

On April 14, 1865, President Lincoln went with his wife to the Ford Theater in Washington, DC, to celebrate the end of the Civil War. Halfway through the play, John Wilkes Booth, an actor who resented the northern victory and the liberation of North America’s slaves, shot and killed President Lincoln.

Today, the spirit of President Lincoln still lives in our memories and it continues to guide us toward creating a nation, and a world, where everyone is treated equally… regardless of our unique differences.

As you can see, Lincoln’s story is the story of an incredible human being who started from very meager beginnings and went on to become not only one of the greatest U.S. presidents, but also one of the influential men in history.

Abraham Lincoln represents the finest example of persistence. Although he faced countless defeats throughout his life — many that must have seemed insurmountable — he never gave up on his dreams.

He lost eight elections, failed in business many times, and suffered a nervous breakdown. He could have quit many times, but he didn’t. Instead, after each defeat he would pick himself up and press forward until he achieved his aspirations. 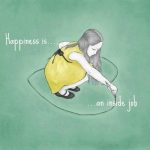 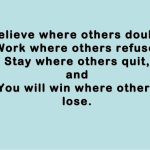