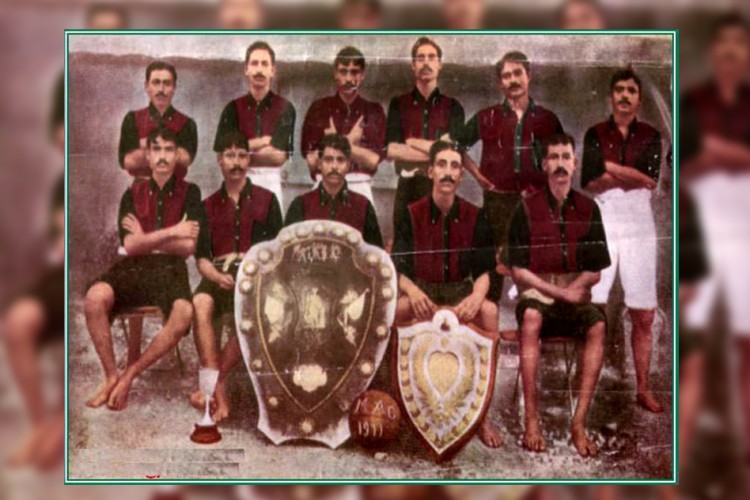 On 15th August, 1889, exactly 58 years before India gained independence, few eminent Citizens of Kolkata met at 14, Balaram Ghosh Street, Kolkata 700004, to promote a patriotic feeling by establishing a Sporting Club for the Indians. Thus, the Mohun Bagan Athletic Club was born.
After the revolt of 1857, the British started flexing their muscles rapidly and also increased the number of British soldiers in the Army. These soldiers used to play sports for recreation and the natives watched them in the act, but did not have the requisite facilities and infrastructure for training in order to compete with the foreigners. Seeing this, the Bengali elite came together to institute the Club.

The First big victory over the British

The early years were very tough for Mohun Bagan as it hardly won any tournaments. In fact, most of the tournaments were dominated by the British and Indian teams were not even allowed to participate. But 1911 was different.

The IFA Shield is one of the most prestigious Football Tournaments in India. Captained by Shibdas Bhaduri, Mohun Bagan was the only Indian representation in 1911. Despite hardships and bias, Mohun Bagan roared to the finals and were supposed to play East Yorkshire Regiment, an army club. Needless to say, it was a very proud day for each and every Indian and around 80,000-1,00,000 people from all over Eastern India are reported to have attended it! In the absence of a proper stadium with a scoreboard, the score was communicated by writing it on Kites and then flying them.

At Half-Time, East Yorkshire dominated the match by 1-0. In the 81st minute, Shibdas Bhaduri scored a goal equaling the score. 8 minutes later, another goal was scored by Abhilash Ghosh and Mohun Bagan won the match. But it was seen as if the Indians had defeated the mighty Empire!

The Englishman reported, “Mohun-Bagan has succeeded in what the Congress and the Swadeshiwallas have failed to do so far to explode the myth that the Britishers are unbeatable in any sphere of life.”

The Manchester Guardian commented, “A team of Bengalees won the Football Association Shield in India after defeating the crack teams of three British Regiments amidst the applause of 80,000 of their countrymen. There is no reason of course to be surprised. Victory of association football goes to the side with the greatest physical fitness, the quickest eye, and the keenest wit.” 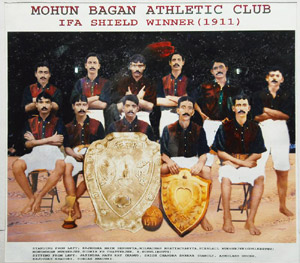 It is said that when the victory procession from in front of Fort William, a man went to Shibdas Bhaduri, the architect of the win, and pointing towards the imperial Flag asked him when he would bring it down. Shibdas replied that they would do it when they win the IFA Shield again. Incidentally`, Mohun Bagan won the Shield again in 1947!

Mohun Bagan turned 100 in 1989. The then Prime Minister Rajiv Gandhi attended the celebrations in Kolkata and designated Mohun Bagan Athletic Club as the National Club of India. The same year the government also issued stamps to commemorate the centenary year of Mohun Bagan and it also became the first club in India to have stamps issued it its glory.

In 2011, a Bengali Movie ‘Egaro’ (Eleven) was made on the 1911 victory. Another Bollywood movie of Shoojit Sircar with John Abraham playing the role of Bhaduri is slated to start shooting in August this year. The growth of Mohun Bagan has been incessant. It is the oldest football in Asia it has won many tournaments and received international acclaim. 4 people associated with Mohun Bagan have received Padma awards, 23 have won Arjuna Awards and 1 got the Dronacharya Award. A lot of clubs have been established in India after Mohun Bagan but till today Mohun Bagan continues to rule the hearts of Indians, irrespective of affiliations to other clubs, as it was another formidable pillar of the freedom struggle. 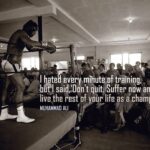 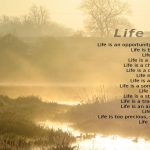