Never quit. if you stumble get back up. What happen no longer yesterday no matters.Today’s another day so get back on track so move closer to your dreams and goals. You can do it. Download

httpv://www.youtube.com/watch?v=RFeV_j0fSHc&NR=1 It’s an inspirational video that inspires viewers to never give up on their goals. Success only comes to those that try and keep trying. You’ll always miss 100% of the shots you don’t take.

Motivational wallpaper on Goals : Aim above the mark to hit the mark Quote by (Ralph Waldo Emerson)

A farmer had a dog who used to sit by the roadside waiting for vehicles to come around. As soon as one came he would run down the road, barking and trying to overtake it. One day a neighbor asked the farmer “Do you think your dog is ever going to catch a car?” The farmer replied, “That is not what bothers …

Goals are to life what wheels are to train. They keep us on track.

Extract from a book: The Story of Naina Lal Kidwai

A young starry eyed girl once went to her father’s office. His father was the CEO of a reputed insurance company. Her father left her alone in a room and went out for a meeting. Those days there were no computers and the little girl did not have anything to do. So she climbed into her father’ chair with great …

Every little thing is Gonna be alright All my perceptions are Gonna be so bright! The sun’s gonna shine The rain’s gonna fall Life’s gonna be ecstatic For one and for all! Love’s in the air Friends are gonna meet Embraces, hugs and smiles Hearts are gonna beat! Breaking my back just doing it Gonna aim for the skies Yes … 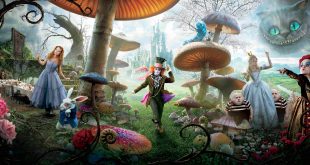 Thing We Learn From Alice In Wonderland It is easy to think that Alice in Wonderland is a dreamland fairy tale for children. On the surface it appears to be just that. However, if you look closer, you will realise that Alice’s world translates into much more than a children’s fairytale. The story has been studied and analysed by psychoanalysts since …