Positive Psychology is a wonderful TED talk by Dr. Martin Seligman where he talks about positive emotions, happiness and mindfulness.

I want to say why psychology was good, why it was not good, and how it may become, in the next 10 years, good enough. And by parallel summary, I want to say the same thing about technology, about entertainment and design, because I think the issues are very similar.

So, why was psychology good? Well, for more than 60 years, psychology worked within the disease model. Ten years ago, when I was on an airplane and I introduced myself to my seatmate, and told them what I did, they’d move away from me, because, quite rightly, they were saying psychology is about finding what’s wrong with you. Spot the loony. And now, when I tell people what I do, they move toward me.

Psychology and psychiatry of the last 60 years can actually claim that we can make miserable people less miserable. And I think that’s terrific. I’m proud of it. But what was not good, the consequences of that, were three things.

The first was moral; that psychologists and psychiatrists became victimologists, pathologizers; that our view of human nature was that if you were in trouble, bricks fell on you. And we forgot that people made choices and decisions. We forgot responsibility. That was the first cost.

The second cost was that we forgot about you people. We forgot about improving normal lives. We forgot about a mission to make relatively untroubled people happier, more fulfilled, more productive. And “genius,” “high-talent,” became a dirty word and No one works on that. 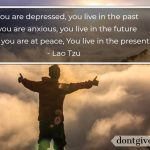