In 2007 Muhammad Ali was names the greatest athlete of all time. This is quite a phenomenal title but reflects the fact that, far from being just a sportsperson, Ali was and is a man who has inspired millions to become better at what they do. He is a celebrity who now works tirelessly for others both within and without of his sport. As an aside fact, the Rumble in the Jungle boxing match in Africa between Ali and George Foreman was, until the 2008 Beijing Olympics, the most popular sporting event of all time 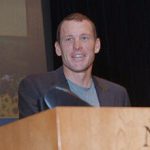