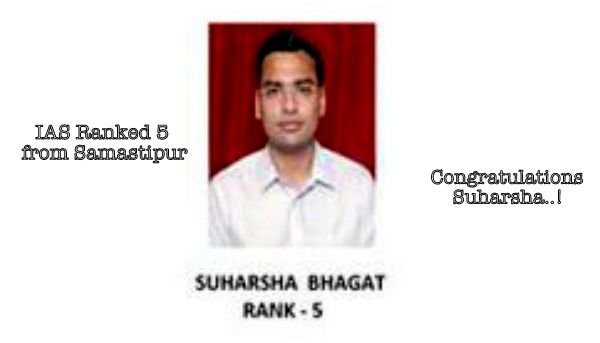 PATNA: Girls have captured the four top ranks in the Union civil services examination, but the topper among boys who has ranked fifth is from Bihar’s Samastipur district. Suharsha Bhagat, 28, who made it to the Indian Revenue Service (IRS) last year, says he made a fresh attempt at the prestigious examination so that he could serve his home state as an IAS official.

“It is double joy for me as I have not just made to the IAS but also secured a rank which entitles me to get the home cadre as per my choice,” said Suharsha, who was selected to Indian Audit and Accounts Service in 2011 and Indian Information Service in 2012. In 2013, he ranked 285 to get into the IRS.
Hard work, confidence, stress-free life and a little bit of luck are what Suharsha lists as the ingredients of his success. “I would be nervous while preparing for the civil services examination earlier. This time I was in a very relaxed frame of mind, which might have helped,” he said, adding the challenging nature of the job was what made him attempt for the IAS.
Born to Dr Birendra Bhagat, a medical professional, and Madhu Bhagat, a homemaker, Suharsha admits he never thought he would make it to Top-5. “That’s something no one can think of. Maybe in Top-100 or so, yes,” he told TOI over phone from Samastipur where his parents live. 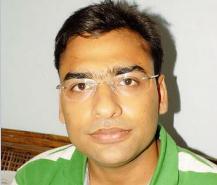 A native of Bhagwan Jaswa village in Samastipur district, Suharsha passed Class X from Ramakrishna Mission Vidyapith at Deoghar (now in Jharkhand) and +2 from DPS at R K Puram in Delhi after which he studied chemical engineering at IIT-Bombay.

Asked if his technocrat background was in any way a hindrance to preparations for the civil services exam, he said, “My subject was geography which also has some technical parts in it. But certain sections, which needed a flair for writing, proved a tad difficult.”

For the civil services aspirants from Bihar, Suharsha says hard work and faith in the Almighty is the key to success. “The number of study hours doesn’t matter. You should have a thorough knowledge of the subject,” he said. 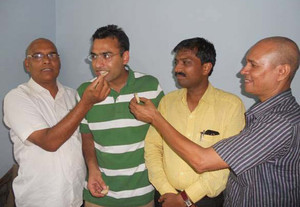 Patna boy Shlok Kumar, who is currently on training as an IPS officer of the UP cadre, has secured 137th rank in the civil services exam the results of which were declared on Saturday. “I may get Indian Foreign Service, but I am not sure if I want to change because UP is a good cadre and nearer home too,” said Shlok, son of IAS officer Sudhir Kumar Rakesh and homemaker Vidushi Prasad.

Shlok, who passed Class X from Don Bosco Academy and Class XII from St Michael’s High School in Patna, said he would talk to his parents and wife Tripti Sudha, to whom he attributed his success, before taking the final decision. 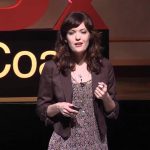