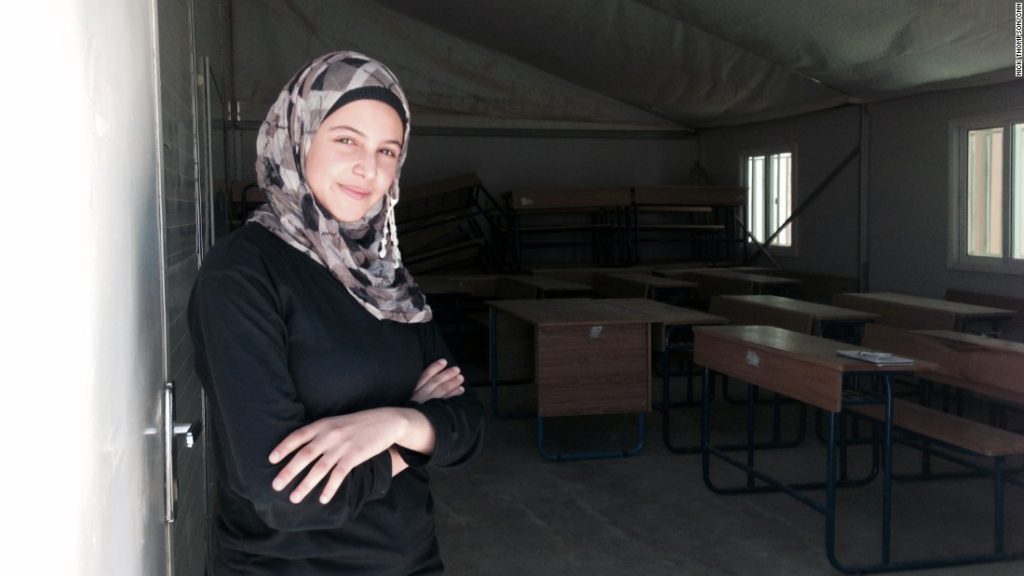 Azraq Refugee Camp, Jordan (CNN)It’s 10:00 a.m. on a Tuesday in this part of the vast, rust-colored expanse of the Jordanian desert, and Mazoun Almellehan doesn’t have time to think about all the things she’s lost. She’s thinking about what comes next.

She’s studying English, she says, and taking a computer course. Class is out for the summer, but she’s hoping to get ahold of next year’s curriculum and books to get a head start on next year.

Mazoun’s favorite subject — although one senses she thoroughly enjoys them all — is science. “When we learn about science, we learn more about the world around us,” she announces with a smile, before almost forgetting her other favorite subject: “Oh, and English of course!”

It is rare to meet a 16-year-old girl with such pure, unbridled enthusiasm for life and the opportunities that lie ahead. It is rarer still to meet such a girl in a desolate refugee camp 62 miles from the Syrian border.

Mazoun left everything behind and fled with her parents and three younger siblings to Jordan when Syria’s civil war began to close in on their village in Daraa in 2013.

The family spent a year in Jordan’s crowded, often chaotic Zaatari refugee camp, before moving to the quieter, better equipped camp in Azraq just over a year ago.

But that’s not what Mazoun is focused on today. Perched on the edge of a desk in her makeshift classroom at Azraq, she wonders how many of her classmates will be rejoining her when school is back in session in September.

Early marriage has soared amongst Syrian refugees in Jordan in the past three years, rising from 18% in 2012 to roughly a third of all marriages involving a Syrian refugee in 2014, according to UNICEF.

And as Syria’s long, brutal civil war grinds on with no end in sight, desperate displaced Syrians are increasingly seeing early marriage as a way to secure the social and financial future of their daughters.

“If you’re a parent and you see an opportunity for your child that may take care of them financially, it’s an extremely difficult decision,” says UNICEF field officer Stephen Allen. “And it’s not a choice you would normally make, but some parents are choosing to go that route.”

The Malala of Syria

Mazoun thinks they’re making a big mistake. For two years she has been going door to door in the camps, waging a one-girl campaign to convince parents to keep their daughters in school instead of pressuring them into wedlock.

“Many families they think that if they get their daughters at a young early age, they’ll be protected. They don’t know that something that might go wrong — and if the marriage fails, the daughter will be vulnerable.”

“Education is very important because it’s the shield we can use to protect ourselves in life. It’s our method to solve our problems,” she says. “If we don’t have education, we can’t defend ourselves.”

Mazoun has been called the “Malala of Syria” for her crusade to keep girls in school, a reference to the teenage Pakistani education activist who survived a Taliban attack on her school bus in 2012.

In February 2014, Malala Yousafzai visited Mazoun in Zaatari. And Mazoun flew to Oslo to see Yousafzai pick up the Nobel Peace Prize in December.

Mazoun’s eyes light up as she describes her friendship with the world’s most famous education activist.

“I’m so proud to be called the ‘Malala of Syria,'” she says. “Malala’s a very dedicated, strong person who faced huge difficulties in her life trying to promote education. So that gives me a huge motivation to do more.”

But Yousafzai seems equally impressed with Mazoun. “When I went to her camp it was great meeting her,” she recalled in a UNHCR YouTube interview last year. “She also has great dreams for her country. She wants her country to be peaceful, she wants to see peace in every corner of Syria. “

The bottom of the barrel

Over the past four years Jordan says it has opened its doors to 1.4 million Syrian people displaced by the civil war engulfing the country, although only 630,000 are registered with the U.N. refugee agency.

Education is just one of the many problems facing these Syrians, and observers say the conditions are getting bleaker by the day.

Last week, Jordan announced it had received just 12% of the $1.9 billion it says it needs to support the Syrians it has taken in.

“The international community can count on Jordan to continue doing its part,” said Jordanian Planning Minister Imad Fakhoury. “But we cannot be left alone in this effort.”

Earlier this year, budget shortfalls forced the World Food Bank to cut food aid to the 80% of Syrian refugees living outside the camps in Jordan.

Funding was left intact for the camps, but UNICEF says everyone has had to tighten their belts.

“Things are worse now than they were last year inside the camps. We can maintain standard services here, but people’s supplementary resources are more stretched,” Stephen Allen says. “Four years in, they’re at the bottom of the barrel.”

“They’re spending their savings, they’ve sold off some of their assets, and whatever support they had coming in from relatives has now dried up.”

A place of refuge

Fifty-five percent of the estimated 14,000 people living in Azraq are children. One of the main challenges is finding a productive way for them to spend their days.

In a playground down the road from the school, the familiar sound of children rocking on swings, playing basketball and horsing around rings out across the grounds.

This Makani — “my space” in Arabic — is a kid-friendly refuge from the daily stresses of camp life, according to Mohammed Abulawi, program manager for the International Medical Corps in Azraq.

“These children suffered on their journey to the border,” Abulawi says. “Many of them have post-traumatic stress syndrome — they’ve lost their friends, their families, and some of them just want to be alone.”

“We’re trying to build a bond between children and improve their coping skills. We want this to be a place where kids can express the emotions and the feelings that they’ve kept inside for a long time.”

Like many of the people in this camp, Hamman, a quiet, skinny 12-year-old boy, came from Daraa.

“I miss swimming the most,” he says softly. “I miss everything in Syria.”

Amid the din of children of playtime at the Makani, another child, this one wearing a dirty black baseball cap, sits in silence reading a book.

“It’s the story of the mouse,” Faisal, 15, explains. “It’s about a small mouse who finds out that his family has been eaten by a big cat.”

Faisal has been in Azraq for six months. He’s from Ghouta, the Damascus suburb where a sarin gas attack killed hundreds of people — many of them children — in the summer of 2013, according to the U.N.

“Mostly I miss my village,” he says. “Our house is there, all of my friends are there.”

Faisal doesn’t go to formal school in the camp, instead preferring to attend informal lessons at the Makani. When he grows up, he wants to be an English teacher.

A place fit for hyenas

Of the 220,000 school age Syrian children in Jordan registered with UNHCR — the actual figure is almost certainly much higher — 130,000 of them are enrolled in formal education. That leaves 90,000 who are not.

Mazoun Almellehan takes us to visit one of these children. For the past year Sharouk, 15, has lived with her mother and two siblings in a white housing container not far from the playground.

Their father stayed behind in Syria. Manahel, Sharouk’s mother, says she can only afford enough phone credit to call her husband once a month.

Abdullah, Sharouk’s 13-year-old brother, is the stand-in father figure for the family. He doesn’t go to school, and forbade her from going too. This suits Sharouk just fine — she doesn’t like to leave the house anyway.

Manahel says she wants her children to go to school, and hopes they’ll have a better life in the future, though it’s difficult for her to envision that right now.

“It’s not possible here,” she says. “What can we say about Azraq? It’s a piece of desert — no one lives in a place like this, not even hyenas.”

But Mazoun has been visiting the family lately, and two weeks ago she managed to convince Sharouk — and her brother — that she needs to go back to class in September.

“Mazoun explained how education is very important for our future,” Sharouk says quietly. “I did know it (before), but she convinced me even more.”

Abdullah, on the other hand, is going to take more convincing. “I will speak to him more,” Mazoun says. “And I will keep speaking to him and his sister until they both go to school.”

One eye on the future

But even in the face of such grim news, Mazoun strikes a more confident tone.

And what does the future hold for Mazoun?

“I want to be a journalist,” she says with a grin. “It’s a very beautiful job, in my opinion.” 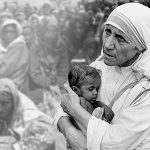 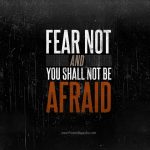