Subhreet Kaur Ghumman, 27, lost her leg after a road accident in 2009. The young nurse needed seven operations on her leg after infection set in. In February she auditioned for India’s Got Talent and came second .Going to the gym played a huge part in her recovery Subhreet’s audition on India’s Got Talent amazed the judges and crowds. She was chosen for the final, but was piped to the show’s £68,000 first prize by Ragini Makkhar and Naadyog dance group. But the show went on to change her life. 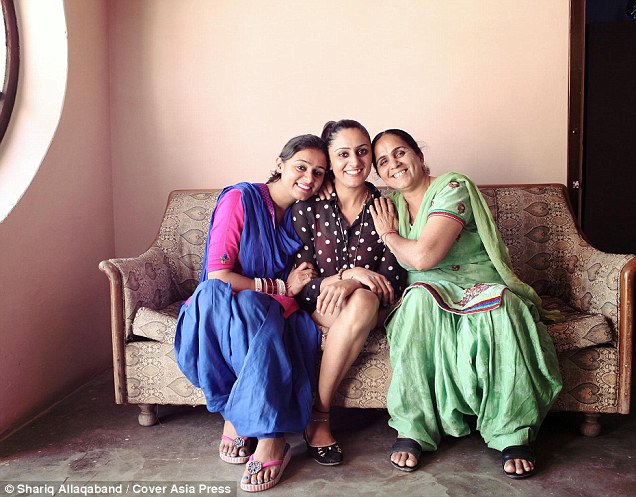 Subhreet is now a celebrity in her hometown. She is continuously asked for her autograph and her dance studio is full of well wishers and supporters. Naturally, Subhreet’s mother, Charapreet Kaur, 57, is delighted her daughter has found love. Charanpreet said, ‘Every mother dreams of seeing her daughter getting married. I had sleepless nights thinking about her marriage after she had lost her leg but God has helped us. ‘My son-in-law is a gem of a person and I feel blessed to have him for my daughter. I know he will always keep her happy.’

Subhreet, a former nurse, is now touring the world with her talents. She said: ‘I always loved dancing but my parents wanted me to study so I worked hard to become a nurse. The accident changed my life; it not only took my leg but it gave me the determination to fulfill my dreams. Now I’m dancing for a living and I love it.’ 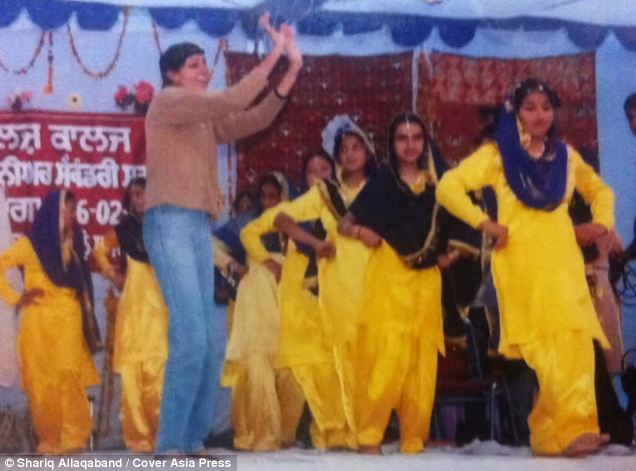 Subhreet used to only dance in her bedroom when she was growing up; too nervous to perform in front of an audience.‘I was so shy I couldn’t talk to anyone, I used to talk only when needed. I was a good student and I used to keep my head in my books,’ Subhreet remembers. ‘Dancing was a love of mine but it was never something I thought I’d ever do professionally.’But in October, 2009, Subhreet’s world was turned upside down.She caught a lift on the back of her friend’s moped after college and just a few milesFROM HOME the bike skidded at speed on a sharp corner and both Subhreet and her friend were thrown off.‘I fractured my knee badly but I wasn’t dying, my life wasn’t in danger thankfully,’ she said. But at the local government hospital Subhreet was left lying in a bed for almost two weeks. 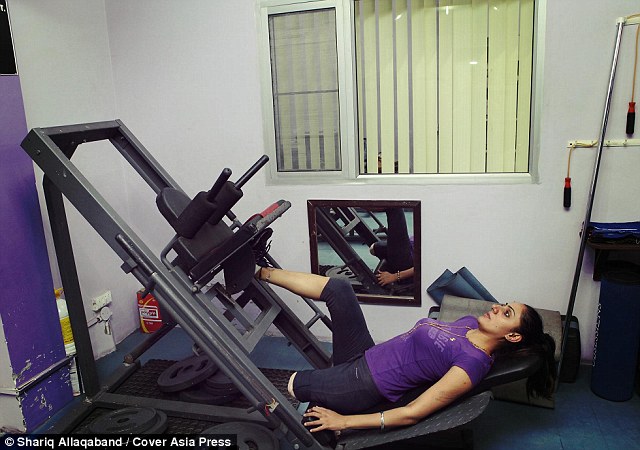 ‘The negligence in a basic government hospital is terrible. My mum begged doctors to treat me, but they just put my leg in a brace and left me. They didn’t even attempt to treat my fracture.’As Subhreet already had a congenital condition called Arterioenous malformation (AVM), an abnormal connection between arteries and veins, doctors were apprehensive about surgery to insert plates to fix her fracture.Eventually Subhreet had the operation on November 5, 15 days after the accident.But during surgery, a doctor cut a vital vein and Subhreet began to bleed uncontrollably. The surgical team managed to stop the bleeding but cut short the operation.‘When I woke up and saw my mother’s face I knew the surgery hadn’t gone well,’ Subhreet added. ‘I was devastated. The surgeon’s incompetence meant I now had to wait for the veins in my leg to heal before they could even attempt to fix my fracture for the second time.’She was sent home to recover but as weeks passed Subhreet’s condition went from bad to worse.‘I lost all feeling in my leg and slowly my toes, foot and my leg started to turn black. I was bed ridden for more than two monthsInfection spread throughout her leg and in the end Subhreet found herself begging her mother to just cut off her leg. 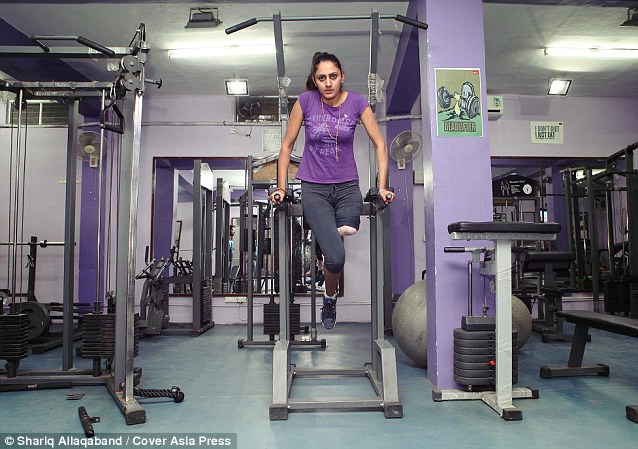 She said: ‘I turned to my mother and asked her do you think my leg will ever be the same again?  She knew the answer. I was sobbing, I was devastated but I knew that I had to cut it off, it was theONLY OPTION left and the only chance I had of trying to get my life back.’Her mother travelled from one hospital to the next near their home in Jhundan village in Punjab, northern India, begging doctors for their help. Over a time period of 12 months, as Subhreet permanently lay in bed, her mother was looking for a doctor to help her. Finally, Dr Harinder Bedi from the Christian Medical College, in Ludhiana, agreed to do the operation on September 16, 2010, almost a year after the bike accident.Subhreet said: ‘It was a huge decision for me but I knew there was no other way. If I wanted to survive I had to cut off my leg. I came to the conclusion it was better to amputate my leg than stay as it was.’

‘When I woke after the operation tears filled my eyes out of pure happiness. That feeling of not having a lifeless leg was amazing.’The surgery cost Charanjeet 7 Lakh (£7,000) and she had to take out a loan to cover the costs. In total Subhreet needed seven operations before she could learn to walk again.

And this year, feeling positive about the future, Subhreet started reading a lot about disabled achievers. They gave her ideas and hope, inspiration to achieve her own dreams. And she decided to apply for India’s Got Talent.She said: ‘My friends started ignoring me, people showed sympathy but it was pity. I didn’t want pity. I decided not to fall into darkness but show the world that I was a strong person and continue my passion for dance. My mother was shocked but happily agreed to support me.’Subhreet tried to enroll at dance studios around her home but she was rejected because of her disability. Until eventually Rockstar Academy, in Chandigarh accepted her. 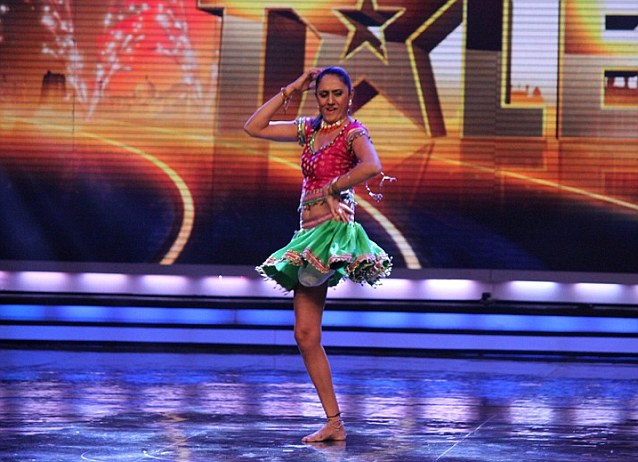 Charanjeet said, ‘My daughter was always a fantastic dancer but I had forced her into studies. After the operation, when she told me that she wanted to dance on TV, I was apprehensive but I supported her dreams.’And in February, Subhreet’s audition on India’s Got Talent amazed the judges and crowds.She was chosen for the final, but was piped to the show’s first prize by Ragini Makkhar and Naadyog dance group and missed out on a £68,000 cash prize but she is not unhappy, the show has changed her life.Subhreet is now a celebrity in her hometown. She is continuously asked for her autograph and her dance studio is full of well wishers and supporters.

She said: ‘My life has changed completely. I have seen the darkest days but now everything seems beautiful. People recognise me when I go out, they ask me for photographs and autographs. It is an amazing feeling.’

Previous Don’t Give Up World Inspirational Tees for Men & Women launched at Frecultr.com
Next Motivational Quote : Motivated By The Fear Of Being Average 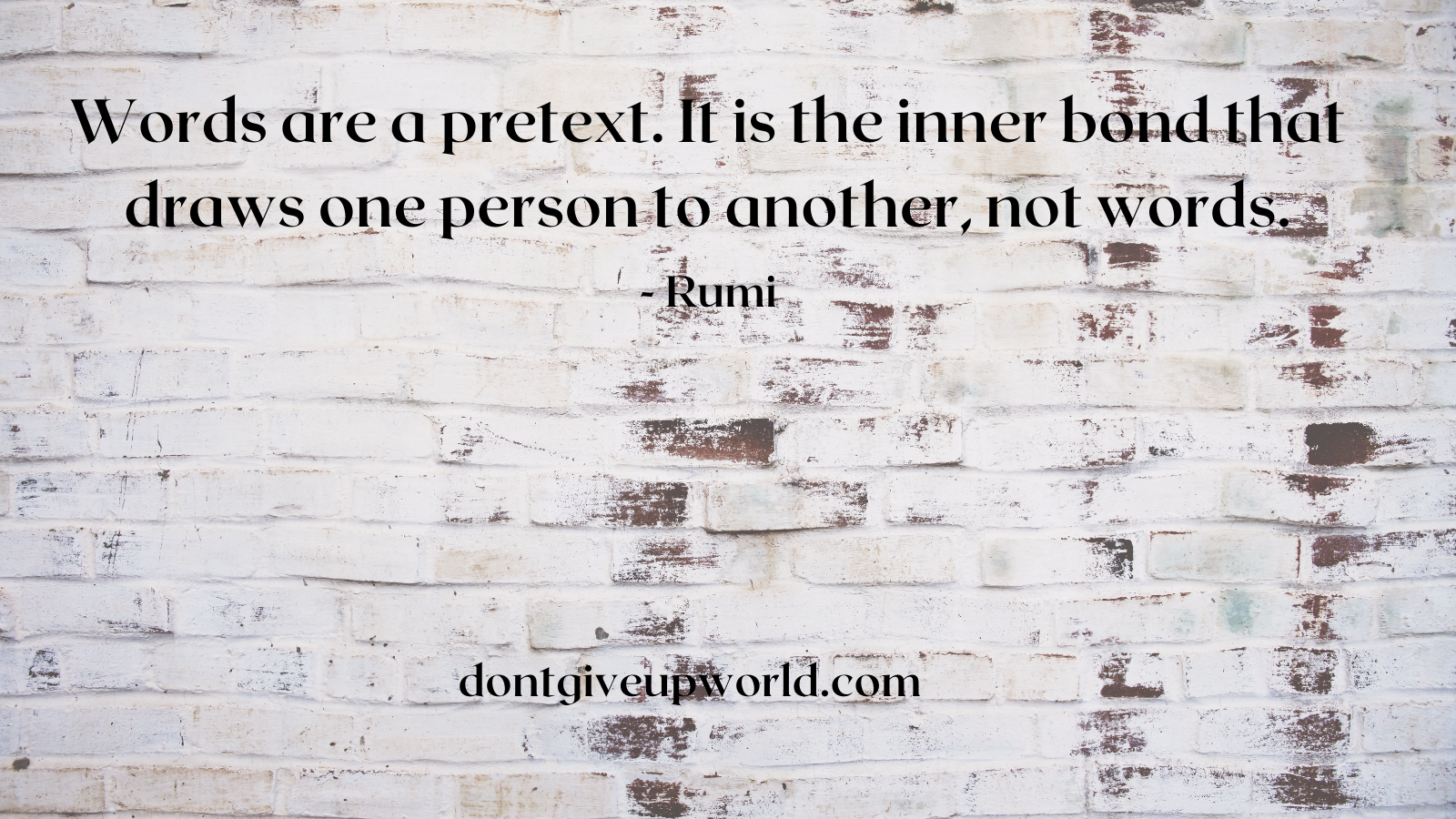 Quote on words are a pretext by Rumi 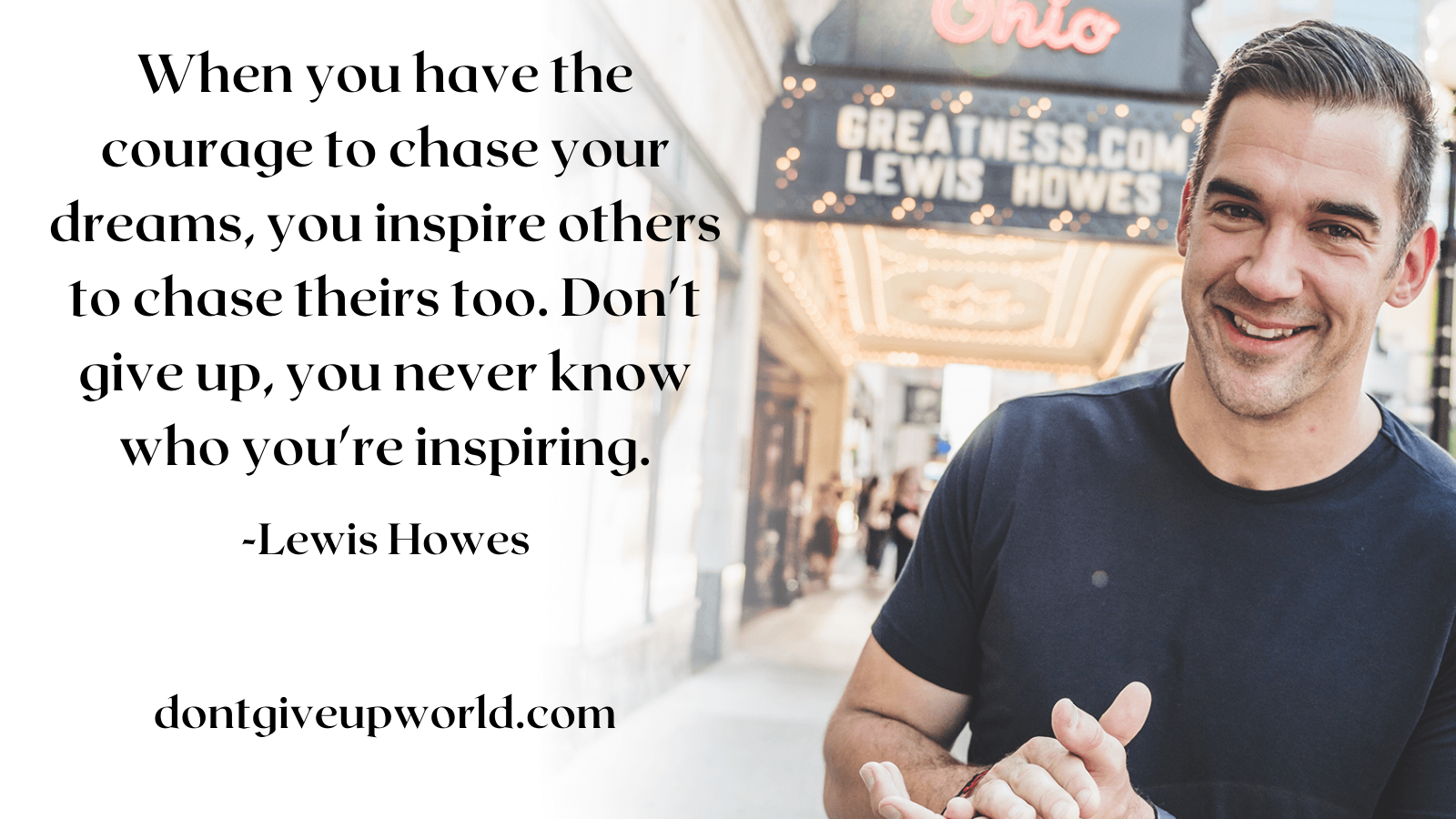 quote on inspiring others to chase a dream by Lewis Howes 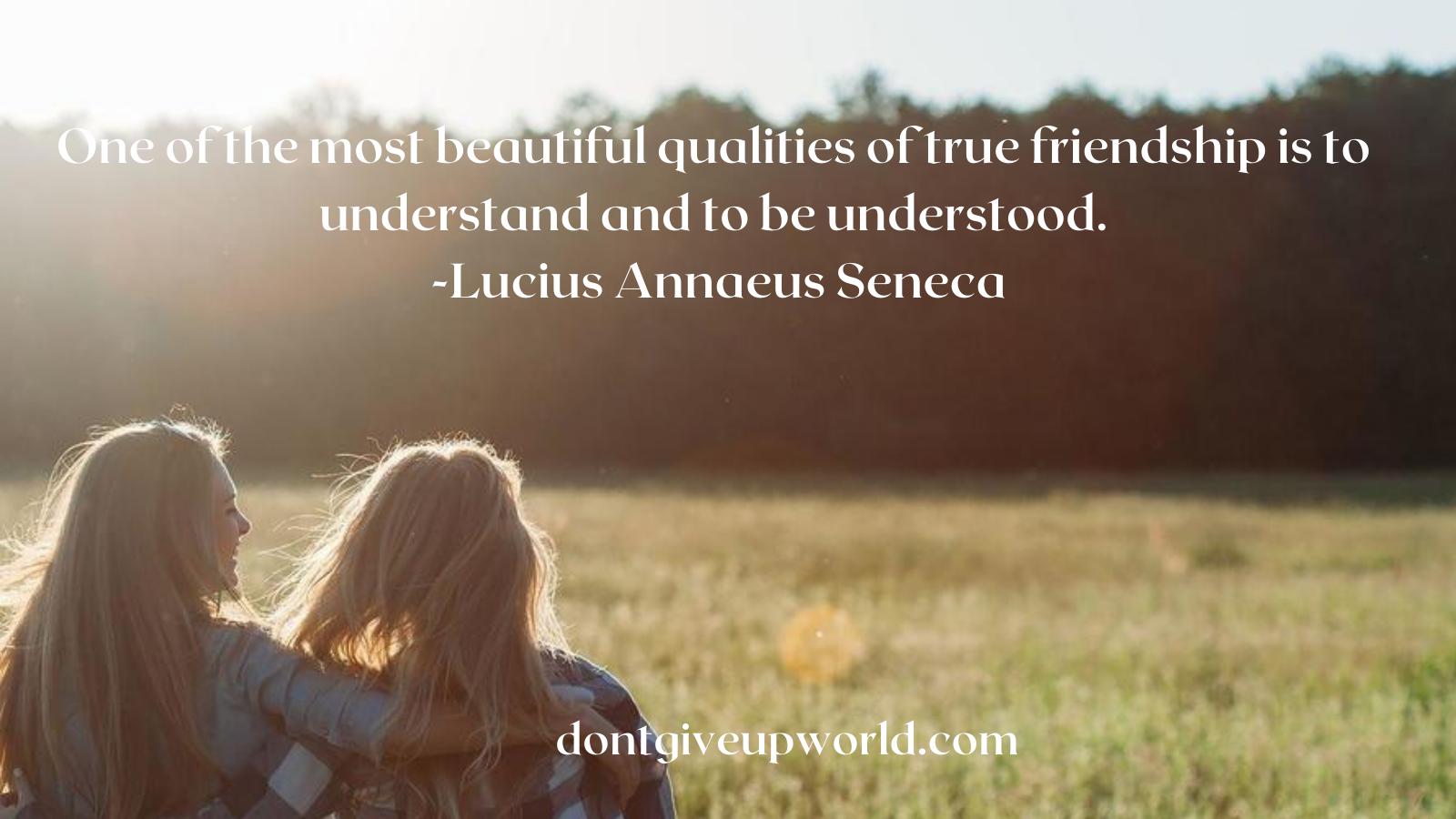 Quote on qualities of true friendship by Lucius Annaeus Seneca

Thoughtful And Inspirational Story about Family Support : We Are Never Alone