Here comes a story from my life.

It was 13th September 2011…a day of reckoning for me when I learnt the limit to which I can endure. I woke up at 6am in the morning with an unbearable abdominal pain. I could not think of any possible reason for the pain, nonetheless my mind was occupied with the thoughts of a job interview coming up at 8am with a US based consultancy firm. Though, I was not much concerned about the job since I had other plans to do with my life after graduating from the college but there lay a bigger question mark on my ability. I had to prove to my girlfriend that I have “it” in me to crack an interview. I was being pestered for long and I had made up my mind to set things clear for once and all. this company was considered among the toughest to crack and I was joyed to have the opportunity to make a tough clear statement. I had cleared the first two rounds pretty easily and was confident about the interview, though I knew not what the company did and how they worked!

But if the morning was any clue to anything, it was that I won’t be able to attend the interview, leave alone cracking it and setting my girlfriend’s doubt clear. When the pain did not subside for nearly an hour, I was rushed to a hospital by my friends. After initial check-up, doctor did not find any possible cause of such a pain and gave me two painkiller shots to alleviate my pain. The next one hour passed twitching and twirling in my bed in hope of some sleep. No respite from pain and I was again rushed to the hospital. This time the doctors insisted on admitting me. I refused on the pretext of the interview later in the day. I had to show the doubters! Yet again, two pain killer shots and this time it did the trick. I slept though the pain lingered.

2 hours, 3 hours, 4 hours passed and when I woke up I found the pain was endurable but I felt sedated, my mind numb, eyes heavy and limbs powerless. But I was driven by my crazy zeal to answer the doubters, and when she happens to be your girlfriend, you are ready to even fight a dragon! Finally I attended the interview, all sedated, shivering and sweating. I was roasted well by the interviewers for 2.5 hours in total spread over 6 hours of interview session. It was tough to answer the questions with the mind not obliging.

Finally at 6pm, 12 hours in pain…the company head declared the list of selected candidates. And there was my name! I did it. And finally I realized that it was not so much as proving to my girlfriend but to myself. I had never extended myself so much…and the day showed me that I can endure and fight. The next day I was diagnosed with renal calculi and was bed ridden for the next 3 weeks.

That day was the best day of my life, not for the success but for the pain. Had there been no pain, I would not have known my capability to take the hit. Now, I feel confident about myself that I can endure through any pain, be it physical, emotional or mental, and I can fight and I will not give up, come what may. That day changed my perception about myself. And I learnt that you grow through pain. 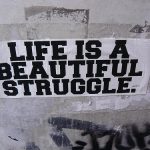 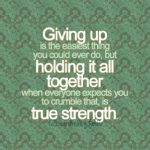