Many of us believe that level to which a person can be motivated depends upon the reserved energy stores that are somehow directly related to the age of a person. So we conclude from this that it is easy for a young person to get motivated but chances for an aged person are negligible. But this is just true just to an extent, Motivation itself brings in a lot of energy in a person irrespective of his age and gender. Given below is the story of Arun Sarswate who proves it to be true and defy all odds. His efforts were published in Daily Newspaper DNA under the section India Positive.

Arun Saraswate, He is neither Shah Rukh Khan from Swades nor is he young or foreign-returned. However at the age of 70, this ‘Pune ka Mama’ has won many hearts by lighting up 67 households of a poor tribal community in the remote Hangrum village in Haflong taluka of Assam.

Having to make do with kerosene lamps, year after year, the villagers were filled with joy when the retired Bajaj Manager, Arun Ganesh Saraswate, undertook his solar electrification project. A resident of Dapodi,Pune, Saraswate, known as ‘Pune ka Mama’ among tribals raised Rs 3.77 lakh as donation from 88 Puneites for his project. He said that he has been visiting Assam since 2003 after retirement, teaching various subjects to the tribal students studying in hostels run by Vanwasi Kalyan Ashram.

While teaching these students , Saraswate suffered frequent power-cuts due to heavy downpour, strong winds and other natural disturbances.One day he purchased two solar lamps from Pune and donated them to two tribal girls pursuing their Matriculation. Impresses by the lamps the villagers requested Saraswate to provide them with the lamps too. He could understand their need for light but having retired he could not afford to donate lamps.

Saraswate urged the Hangrum community to raise part of the funds for the project through community initiative and promised to raise the rest through donation from Pune. While tribals collected Rs 69000, ??Saraswate raised Rs. 3.77 Lakh through Donations by 88 Puneites. Each Solar Lamp consists of one solar panel with a life of 25 years, one LED lamp with capacity of one lakh working hours and a rechargeable Battery.

After successfully completing the project, Saraswate returned to Pune and organized a get-together of donors on February 19th at MES Bhave High School. He thanked them profusely for their generous financial support which not only lit up homes in remote Assam but also the souls of Hangrum Villagers.

So if you ever feel down and think that you are not young enough to do something, just remember this small story. It’s never too late to do anything, Just Dont Give UP. 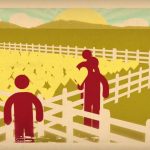